Color Me Insulted: A Failed Attempt at Engagement

Picture this: a well-known brokerage firm recovering from a major scandal is faced with increasing losses and decreasing brand confidence. A well-intentioned attempt to rally its “dispirited” employees backfires and results in further disengagement.

Here’s the true and sad story as told to me recently by a former employee.

“I remember sitting at my mahogany desk in the summer of 1987 worried about what might happen. Working for E.F. Hutton meant I was at an elite firm and my desk was one of many amenities.

E. F. Hutton had gone through its share of travails, one of which was its check-kiting scandal. I was working in a branch office that was one of the biggest offenders. I had been hired right after the employees involved had been let go. Because of these offenses, our office was audited extensively: four times a year by the SEC, and about the same amount annually in internal audits.

We had been working hard to turn the company around, and as far as our branch could be considered, we were procedurally whistle-clean. The clients were loyal and the money was still coming in.

However, because of these and other problems, the company as a whole was not doing well. Losses were mounting and the stock was taking a hit on the NYSE. All E.F. Hutton employees were holding their collective breath about what sort of message we would get from management concerning the future of the company. We waited for a message, and waited, and waited.

Finally, after a week or more of waiting, we received something. A large package came from corporate headquarters. Inside the package for each employee was a coloring book and a small box of crayons. 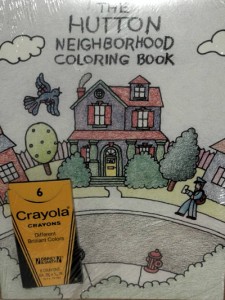 The book was a very simplistic children’s story saying we were no longer the nicest house on the block and we all needed to work together to defeat our rivals and make our place nicer. The message was insulting and, to me, insinuated that the employees were only able to understand a message written for a 1st grader. This was sent to all 18,000+ employees including brokers that had taken an exhaustive 6-hour long test to become a stock broker, as well as operational employees who knew the ins and outs of a complex financial industry. Employees at the main office New York City had been in the industry working at that level for 20 years or more.

Within an hour, the trashcans were full of the books. Some employees took the crayons home for their children, clearly feeling that the crayons were the only valuable item they had received.

Soon after the company was sold to Shearson Lehman.”

Both the medium and the message of the Hutton Coloring Book failed. Employees can handle bad news IF leadership is honest and respectful in communicating what happened, what corrective measures are in place as a result, and what will be needed moving forward.

A once powerful brand (“When E.F. Hutton talks, people listen”), E.F. Hutton also serves as an example of what NOT to do in engaging employees.