Not So Different – Helping Children Understand

He’s a writer of a popular blog, a book author, and sports freak.

He’s cofounder of a growing nonprofit that helps others live better.

He’s an in-demand speaker for audiences that range from elementary schools to universities to pharmaceutical companies.

He loves to travel with his girlfriend and his family.

He’s Shane Burcaw, and his new children’s book about what it’s like living with a disability was just released. 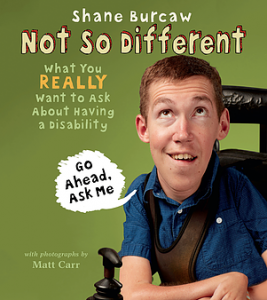 This book is so Shane

Based on the questions he’s typically asked (Why is your head so much bigger than the rest of your body? …  How do you play with your friends? … Do people ever make fun of you?), Shane explains how he lives with spinal muscular atrophy. He describes why and how he relies on his family and friends to help him get dressed, shower, eat, and go to the bathroom — written in his inimitable style — with humor, directness, and a positive attitude.

Shane advocates the “power of positivity” in his writing and his nonprofit, Laughing At My Nightmare, to help others better cope with stress and adversity. Shane wrote his new book to help children understand that people who look different aren’t so different after all.

“So many of the social stigmas that people with disabilities face could be squashed if we were able to instill in young people the idea that we are all different; we have different strengths, weaknesses, and abilities, and that’s not just okay, it’s beautiful.”

I highly recommend Not So Different: What You Really Want to Ask About Having a Disability and have already bought several copies: one for my personal library and the others to share.

It’s a great gift idea for children, schools, and libraries.